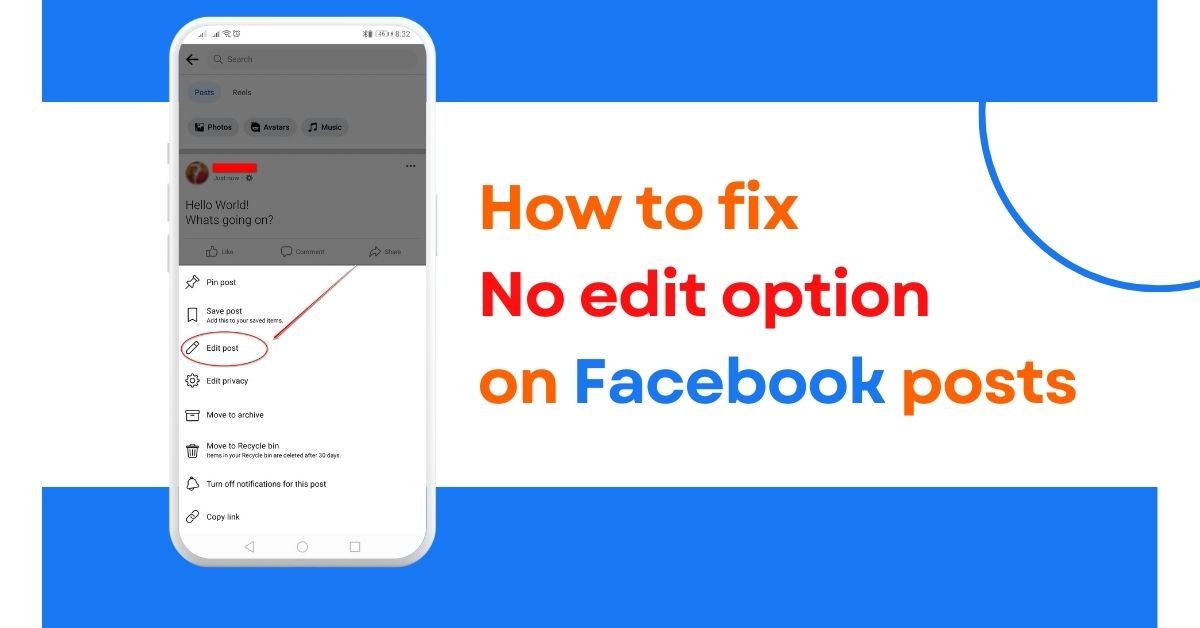 It would be filled with typos, right?

The edit option on Facebook is one of the most liked feature on Facebook as people like correcting their typos and updating their posts or captions.

This allows users to edit a post that has already been published!

Whenever you made a misspell or grammar error on your Facebook post, you obviously want to correct them, right?

How to fix No edit option on Facebook posts?

Now, let’s explore all the possible solutions to fix the No edit option on Facebook post error.

The first step in fixing the No edit option on Facebook is to check if Facebook is down for some reason.

While such big companies never let their website or app go down, sometimes they cannot control the situation and are forced to face this problem. As a result, users may encounter many other problems including the No edit option on Facebook posts.

In this case, the only solution you have is to wait for some hours and check it again. As soon as Facebook’s server is running well, you will get the feature back to your Facebook account.

If DownDetector reports that Facebook is up, the next step is to check your own internet connection. Make sure that your mobile network is working or you are connected to the wifi.

If you are not sure how to know if the mobile data or the wifi is working properly on your device, Simply open the Youtube app and try to play some videos.

If everything is fine but you are still not able to see the Edit option on your Facebook, follow the further steps….

Most of the time, clearing the app cache can solve various kinds of problems you face while using the app.

This will force the app to reload all the data from the server, and you are more likely to get the Edit Post option back to your Facebook.

To clear the Facebook app cache on your android device:

If you would like to delete all the data connected to the Facebook app, you can tap on the CLEAR DATA button.

If you are using iPhone:

If you’re still seeing the “No edit option” on your Facebook posts, it’s possible that there’s a pending update for the Facebook app on your device.

Go to your App store or Play store and check if the app is waiting for updates.

Then update the app and again check if the Edit post option is available on your Facebook.

Sometimes the latest version of an app may not be compatible with your device and may occur such problems. If that’s the case, try downloading an older version of the app and check if the problem is fixed.

If the older version of the app doesn’t work, try uninstalling and reinstalling the app.

Sometimes a simple restart will fix the problem. To restart your phone, Press and hold the power button for a few seconds and tap on “Restart” or “Reboot”

If none of the techniques above works and you’re still having trouble editing your posts, you can contact Facebook customer support for further assistance.

People are spreading rumours on social media or on various forums that Facebook has removed this feature. But in reality, it’s 100% wrong!

Some users might have faced the error but as I have already mentioned that this is a common error occur due to some technical problems. And can get rid of it by following the tips above.

Have you ever encountered no edit option on Facebook?